Minutes of the Fed’s April meeting lead to spike in mortgage rates. Is it permanent?

Post update 07-01-2016: A few days after we published this post, the recovery we predicted in this post occurred and with the assistance of a bond rally resulting from Brexit, mortgage rates have recently hit a 4-year low.

Minutes of the Fed’s April meeting, indicating that the Federal Reserve might soon raise the rate on the interest it charges to banks led to an immediate and sharp increase in the yield on the 10 year treasury note and both short and longer term mortgage interest rates, including the most frequently chosen option by mortgage applicants, the 30 year fixed-rate loan. Despite this immediate knee-jerk reaction, even if the Federal Reserve did begin tightening in June, this would not necessarily lead to increased rates.

We’ve been watching mortgage rates for more than 25 years at AmeriFund and one lesson learned is that the dust will soon settle after spikes in rates that relate solely to comments by members of the Federal Reserve open market committee. With wholesale lenders still being able to help people find the right home that matches their mortgages. Ultimately, rates are determined by market influences that relate economic factors, primarily to inflation, and indirectly to the strength of the U.S. economy. Absent major changes in economic indicators of strength in the economy (the most important of which is inflationary pressure in the job market) or indications of inflation rearing its ugly head (most typically in the form of increases in the consumer price index or wholesale price index), mortgage rates will not see rapid increases of the type exhibited last week.

This chart shows the yield on the 10 year treasury note over the past six months. As you can see there have been a couple of prior run-ups in yields (rates) followed by an immediate recovery equal in strength and duration. 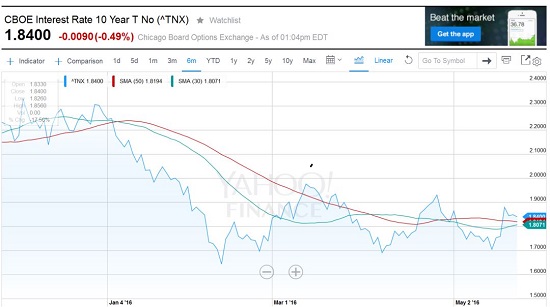 We’ve overlaid a 30-day and 50-day moving average (the red and green lines) which graphically remove the volatility of the yield and show it as a steady trend-line. As you can see, the recent spike took the current yield from well below the averages to well above the averages. A rational view of the market would dictate waiting to lock until the current yield as fallen to or below the moving averages. Our recommendation to our borrowers is to float until the current yield drops to or below 1.800 on the 10 year treasury note.

The 50-day moving average is actually still in a downward trend meaning that an argument could easily be made that the yield will again drop to recent low levels at lower than 1.750.