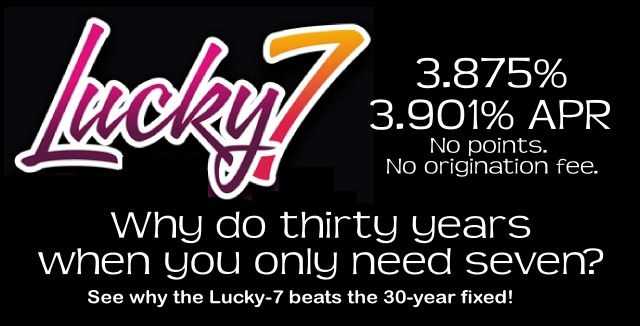 AmeriFund’s Lucky-7 loan program is fixed at a rate lower than current 30-year loans, then adjusts to one-year or six-month ARM, with a variable rate after that initial fixed period of seven years.

Why would a borrower opt for the Lucky-7 in lieu of a more traditional 30-year fixed rate loan?

Easy answer. More that more than 90% of mortgages are paid-off within seven years of the date they were inked? Many of these mortgages, that are acquired during a period when interest rates are higher than the average, will be replaced in a refinance that replaces the existing loan with a new one at a lower rate. Others are paid in full in less than years due to employment relocation of the borrower. Still others are paid in full when the borrowers sell their existing homes and “upgrade” to a larger home, often to accommodate a growing family. The opposite occurs as the nest empties and older borrowers seek smaller homes for retirement.

So, if people only need a mortgage for seven years, why are so many opting for a 30-year fixed? Simply stated, that makes no sense.

I’ve been originating mortgage loans for more than 30 years and have usually encouraged borrowers to opt for our Lucky-7 (fixed-adjustable) in lieu of the more commonly utilized 30-year fixed rate loan.

During times of very low rates, like those we saw for an unusually long period between 2008 and 2017, the spread between the available rates on the Lucky-7 and the 30-year fixed were insignificant. There simply wasn’t enough incentive, in terms of savings, to steer a borrower into a loan that had the potential of higher rates at the end of the seven-year fixed period, even though that risk was low.

But with the spread between the two loan programs having reached half a percentage point, I’m now back to encouraging borrowers to opt for our Lucky-7.

At the time of publishing this article, AmeriFund was offering the 30-year fixed-rate at 4.25% with no lender fees. But our Lucky-7 was priced at 3.75 with no points or origination fee. That’s a substantial spread. On a $440,000 loan amount that half-percentage point difference on the interest rate would save the borrower a minimum of $16,000 over the first seven years of the mortgage.

A few years ago, I went back and evaluated the performance of seven-year balloons and seven-year ARMs I had originated over the preceding 20 years. On every one of those loans the borrowers had paid less interest than they would have paid had they opted for a 30-year fixed rate. The vast majority had paid the loan in full before it ever converted into the adjustable-rate loan. The few that had not sold their homes within that first seven years, had refinanced, with my assistance, into a fixed-rate at the same or lower rate than they had on that seven-year loan.

And when the spread reaches half a percentage point the savings over the first seven years are so significant, that even if the loan were not paid in full until many years after the seventh anniversary, and it adjusts to the highest rate allowable under the caps, the higher amount of interest paid after the seventh year still never exceeds the amount saved during the initial seven-years at the lower rate.

So before you get your mind made up about getting a 30-year fixed-rate loan, give some consideration to AmeriFund Lucky-7. You might just save yourself a load of cash. 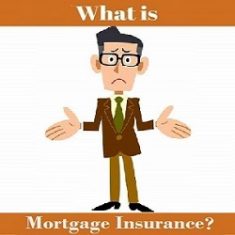